The need for a monorail – Angelo Xuereb 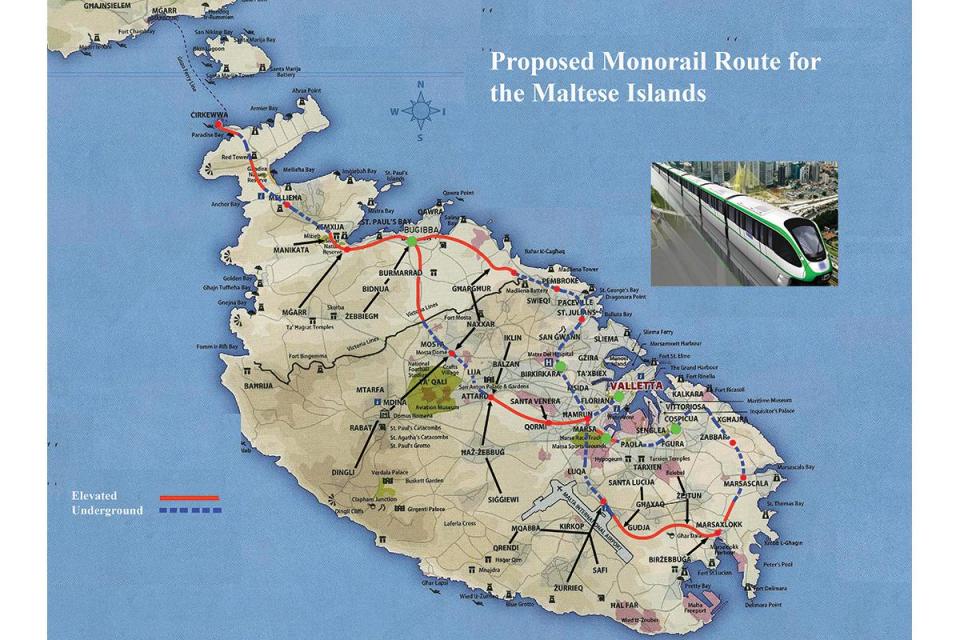 I am very pleased that President George Vella strongly supports the idea to introduce a monorail system to eliminate traffic congestion and ever-increasing emissions in Malta.

I have been promoting the concept of introducing a monorail system since 1991. At the time, I already considered the traffic problem acute. Now, 30 years later, the problem is becoming more and more severe. Admittedly, significant strides are continuously being made to improve our road network. However, if vehicles continue to increase, we will have no other option but to create more flyovers, traffic junctions and wider roads, all to the detriment of our environment and our health.

While I welcome the government’s call for a study into the introduction of a monorail/ metro system, this has been dragging on for far too long.

The government would greatly benefit by opening up the discussion to public consultation. I am not against a plan being drawn up by foreign experts but, from my experience, local experts and stakeholders are more aware of the particularities of the problems we face.

Recently, my friend, engineer Konrad Xuereb has also been promoting the idea of introducing a metro system. The least that the government or its consultants can do is approach us, listen to our views and concerns and then continue with their in-depth studies. These studies will reveal if it is better to opt for a monorail or metro system. The key thing is that we implement a modern, mass transportation system to improve mobility across the country.

Since my first proposal of 1991, I have continued to extend and improve the system over the years. I have published these updated proposals in 1996, 2001, 2013, 2014, 2015, 2016 and 2017. Naturally, the more in-depth the studies conducted, the more refined a concept we can come up with to determine the system, routes and location of the stations that would be the least damaging and most cost-effective. This study would also include the best way to split the project into phases.

My proposal is to have a system that makes use of both elevated and tunnel rails. The gradient of the rail should not exceed 10 degrees, which will allow the underground tunnel to pass beneath urban areas and hills, while elevated rails will be erected in rural areas.

For many reasons, the stations and interchange points should not be located in the urban core but in the periphery of the urban areas to provide an integrated public transportation system. It is impossible to have a station in the centre of each of our towns and villages, considering the heritage, space and incompatible structures. For better efficiency, these stations will still need to integrate electric buses, which can be referred to as ‘circular buses’, that follow a route around urban areas and transport commuters directly to the nearest station.

“My proposal is to have a system that makes use of both elevated and tunnel rails– Angelo Xuereb.”

It is imperative that there be frequent bus stops to encourage commuters to walk to their nearest bus stop, for not more than 10 minutes, rather than use their personal car.

The monorail system proposed plan shown in the picture is feasible and has more advantages than a complete underground metro system.

It may take more than 10 years to complete the entire system from the final approval of the master plan. Therefore, it is a must that the project be developed in phases. The first phase should target the most congested urban areas around the inner and outer harbour areas. When localities like Valletta, Cottonera, Marsa, Ħamrun, Msida, Sliema and Gżira areas were developed these were never designed for car parking and, in fact, have minimal or no private garages. To make matters worse, these areas are densely populated and full of narrow streets.

Once this initial stage is implemented, it will be easier to carry out extensions to the grid over the subsequent phases. The second priority is to extend to the airport, Paceville, St Paul’s Bay and Marsascala areas. Over time, the government will decide on the priorities that extend to Ċirkewwa.

It is of utmost importance that when a master plan is proposed it has to be approved by all political parties in parliament. This is a long-term project that cannot be halted after a new party is elected to government.

The government should seriously take up the introduction of this modern and environmentally friendly integrated public transportation system with urgency. Time is crucial considering our ever-increasing traffic and environmental issues.

Expansion Trajectory 8 November 2022
As AX Group continues to take on larger and more challenging projects, Chairman Angelo Xuereb, recipient of the Malta Stock Exchange Lifetime Achievement award for 2021, reflects on his 47-year entrepreneurial journey and is confident of a bright future for the AX Group. Read More
AX Group Founder and Chairman Angelo Xuereb celebrates his 70th birthday 15 June 2022
AX Group’s beginnings can be traced to 1975 when the entrepreneur first launched AX Construction using a €500 wedding gift as an initial investment. Founder and Chairman of AX Group Angelo Xuereb celebrated his 70th birthday on Wednesday. The company shared a selection of pictures dating back to the early years when Mr Xuereb founded the Group via AX […] Read More
AX Awards 2022: Recognising service, merit and talent 15 May 2022
Over the years, the AX Group’s Annual Long Service Employee Awards Night has become one of the most highly anticipated events as it seeks to recognise employees and show gratitude for their years of unwavering service to the company across all the divisions. AX Group Chairman, Mr Angelo Xuereb, said he was elated that over […] Read More
AX Group inaugurates new business centre in Mosta

Spearheading new standards of quality and community
Scroll to top