For a better Valletta 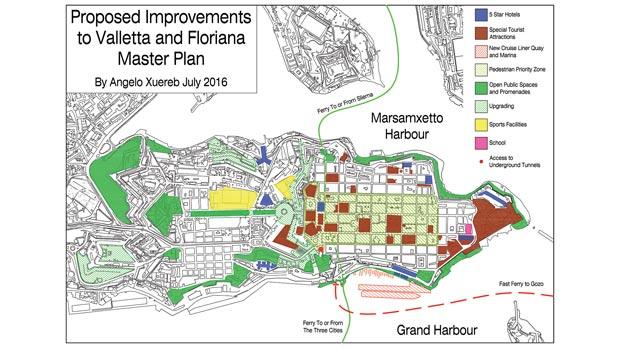 I’ve been harping on the need for a holistic master plan for Valletta for over two decades. The first article I wrote, suggesting a master plan for the capital city, was published in The Sunday Times in 1989. Since then, some of my proposals have been taken on board – the maritime link from Sliema to Valletta to Cottonera, pedestrianisation projects, the total upgrading of City Gate (Triton Square), the de Valette statue, and the Park & Ride in Horn Works Ditch. Others have been shelved or ditched.

Recently, I launched a 10-year master plan for our capital city. Valletta is short of adequate parking spaces. I’m suggesting two large underground car parks in its vicinity – one with a capacity of around 3,000 cars, which can be developed below the Floriana playing field, while reconstructing the existing football ground and other outdoor facilities together with a new regional indoor sports centre.

I’m also suggesting transforming the playing field in Floriana, overlooking Grand Harbour, into another large car park. In addition, I’m proposing mini-underground car parks for the top management of firms and hotels located in Valletta during the day, as well as a car park underneath the Valletta primary school – which can be demolished and rebuilt into a modern state-of-the art school.

This car park could be used by residents and patrons and employees of the Mediterranean Conference Centre. My master plan for Valletta includes a new hotel to replace the shabby Evans Buildings.

The vision for Valletta is that of a vibrant city

Currently, the main commercial activities are centred in the upper part of Republic and Merchants streets. In order to generate further commercial activity, I’m also proposing the development of 5-star hotels on the periphery of Valletta which indirectly would upgrade the area.

One way to generate commercial activity all around Valletta is to create a free public shuttle circular bus system with low-floor buses – free of charge to the consumer. This could be done immediately, and does not require large-scale investment.

To promote a more car-free Valletta, I’m suggesting two transportation nodes: a land transportation node next to the Granaries, which would give commuters a wide choice of entering Valletta – the circular buses to the centre of the city; a taxi or electric cab; a horse-drawn cab or a link to the underground electric tram that connects the Park & Ride to City Gate.

Valletta requires constant renovation and restoration works. For this purpose, I’m suggesting the restoration of the two ravelin ditches that lie beneath the Triton Fountain, and the fountain relocated to a more suitable location.

These two ditches are already connected to the new City Gate lift and to the old railway tunnel which can be linked to the Park & Ride by means of an electric tram operating 24 hours, seven days a week. In its place an open space which many have often suggested for the entrance of the capital city.

It would complement Renzo Piano’s entrance to our capital. I am also suggesting that the Palace be converted into a national museum housing artefacts from various eras of Malta’s history together with the MUZA building. With better transport systems in place, and adequate parking spaces, pedestrianisation in Valletta can be implemented on a wider scale. This could well be complemented with a well-designed promenade at Marsamxett and Barriera Wharf.

Maritime connectivity is crucial to connect Valletta to other touristic hotspots – mainly Sliema/St Julian’s and the Cottonera. Maritime connectivity between the three encourages further investment in the catering industry. The tender for the tunnel connecting the Sliema Ferries to Valletta and Cottonera is currently being processed.

Once implemented, it shall generate more commercial activity in all three cities. I’m also suggesting a maritime transportation node located at the bottom of Ta’ Liesse Hill in the vicinity of the Barracca lift. This could also be used by a fast ferry shuttle service to and from Gozo, generating commercial activity there as well.

Once this is functioning, tourists heading to Gozo would be able to take a taxi to Valletta and all the way to Gozo. Of course, this would also be of benefit to the residents of Gozo.

The cruise liner industry needs to be nurtured. Hence my suggestion for another cruise liner quay in the vicinity of the old fish market at Barriera Wharf, incorporating a marina for super yachts.

While commercial activity in Valletta is to the benefit of its business community, residents should be given equal priority. I am therefore putting forward a wide range of proposals – from the most basic: the restoration of all its façades, to incentives which include the conversion of temporary rent to long-term leases to attract new residents to Valletta.

An inventory of government-owned buildings in Valletta is long overdue – it will help to identify which properties government can dispose of or put up for rent or long let. I am also suggesting that certain zones in Valletta should be for residential purposes only, while others allocated to office and commercial activity.

All outdoor live entertainment should come to a halt at 11pm. Valletta cannot be turned into another Paceville. Deliveries too should be restricted to off-peak hours in order to create the least disturbance possible to the Valletta residents and its visitors.

I’m also suggesting the use of underutilised convents located within the city and the demolishing of social housing at its entrance.

There are large convents which today house a few nuns and friars. I’m sure that the Church would be willing to convert them for other useful purposes, as are homes for the elderly or child care centres – the latter a welcoming relief to thousands of young parents who work in Valletta. Social housing at the entrance of Valletta is an eyesore, which a capital city does not deserve. I am therefore suggesting the relocation of its families to other vacant property in Valletta, given to them fully restored, serviced with lifts and modern common areas and on a freehold title, contrary to the leased titles they currently enjoy. This way the lessors would be greatly compensated for the move.

The demolition of these dwellings shall uncover the gem that is Palazzo Ferreria and provide unobstructed views of St John’s Cavalier. The existing commercial entities can still be located in a modern structure around the new large square at a lower level, in order not to interfere with the surrounding beauty. Access to this new square shall be complimentary to the new adjacent Spanish steps.

I shall in the coming months launch a wider discussion, themed Għal Belt Aħjar (For a better Valletta) with key stakeholders and residents alike.

Angelo Xuereb is chairman and  CEO of AX Holdings.

Expansion Trajectory 8 November 2022
As AX Group continues to take on larger and more challenging projects, Chairman Angelo Xuereb, recipient of the Malta Stock Exchange Lifetime Achievement award for 2021, reflects on his 47-year entrepreneurial journey and is confident of a bright future for the AX Group. Read More
AX Group Founder and Chairman Angelo Xuereb celebrates his 70th birthday 15 June 2022
AX Group’s beginnings can be traced to 1975 when the entrepreneur first launched AX Construction using a €500 wedding gift as an initial investment. Founder and Chairman of AX Group Angelo Xuereb celebrated his 70th birthday on Wednesday. The company shared a selection of pictures dating back to the early years when Mr Xuereb founded the Group via AX […] Read More
AX Awards 2022: Recognising service, merit and talent 15 May 2022
Over the years, the AX Group’s Annual Long Service Employee Awards Night has become one of the most highly anticipated events as it seeks to recognise employees and show gratitude for their years of unwavering service to the company across all the divisions. AX Group Chairman, Mr Angelo Xuereb, said he was elated that over […] Read More
Retirement village: Reap what you sow, Angelo Xuereb urges retirees